Fish of a Lifetime in Scotland 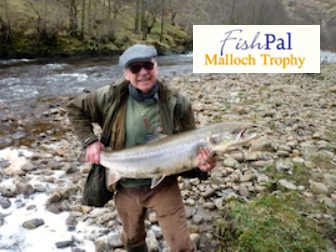 Tom Buchanan fishing the Lyon has caught the biggest salmon so far this year on the fly at 35 pound.

A regular rod on the South Chesthill Estate. He is their longest tenant and has fished the water since 1972.

First fish he caught that day was in the Gate pool, he was fishing the pool fairly fast as he is big believer of fishing pools quickly and resting them. Coming down to the tail of the pool, his first fish of the day a salmon of 12lb came across and took his fly. He played the fish quickly and as it went into the net the fly came off. 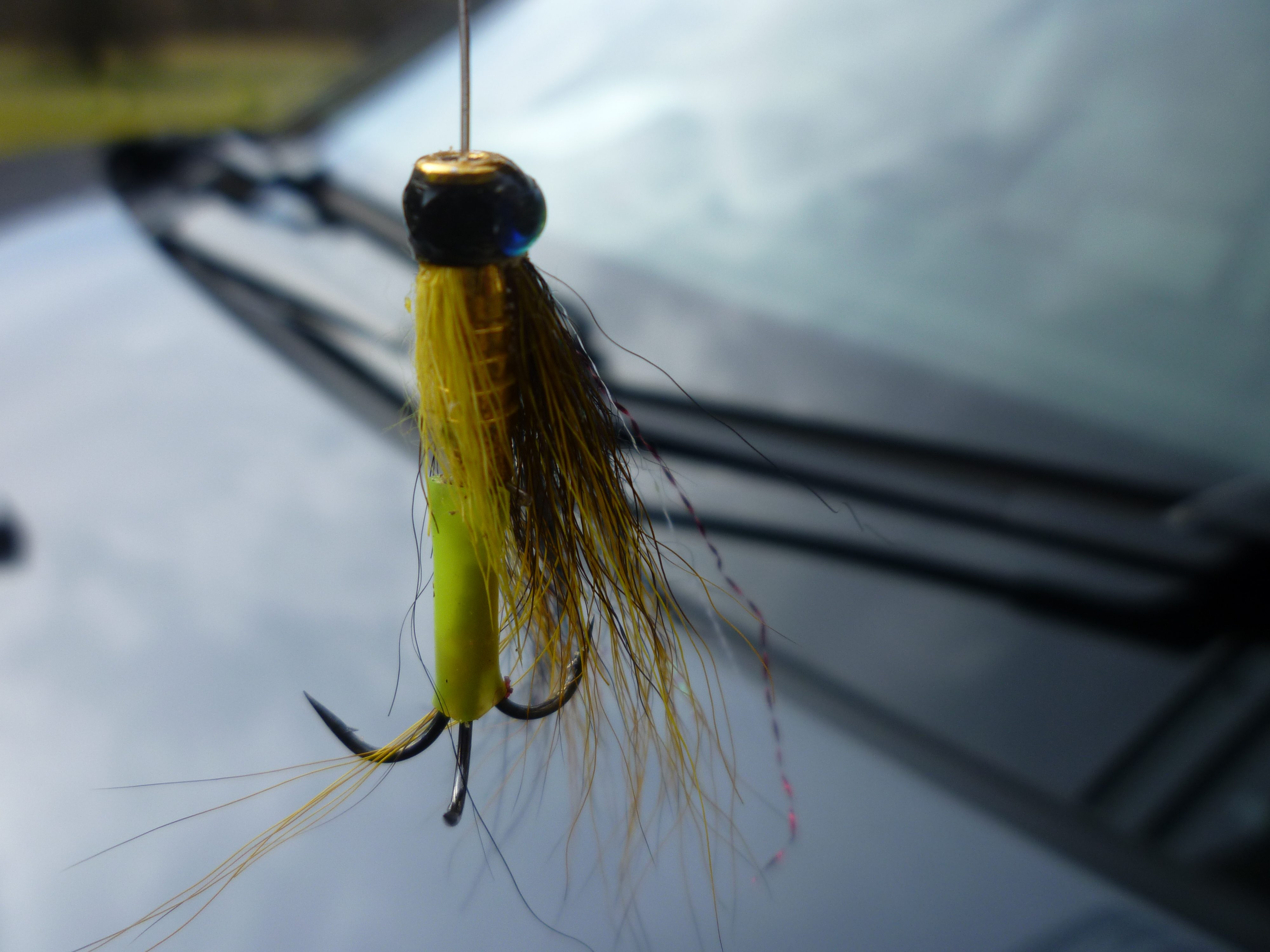 Mary joined him as he fished the Rock Pool and watched Tom casting and fishing a short line. It took him 4 casts to cast out the full length out and on his 5th cast as it came across the current there was a mighty explosion from the fish taking my fly.  I asked Mary to take my camera out of my pocket because I knew this was a big one. The fish took me all over the place,  I looked like a under dog playing the fish.

I didn’t want him to go to a deep black pocket as I knew i would lose him, so I played him hard on my side of the  current. My 12ft Daiwa 3 piece rod (25 years old and purchased from John Norris) was bent double for 20minutes.

I said to Mary my wife the net won’t be any good. The fish was banked, with just the wee fly at the front of his mouth holding on by a thread, it was a stroke of luck he was hooked in the front of the mouth as there was not one spec of blood spilled.  I calmed him down by stroking him. 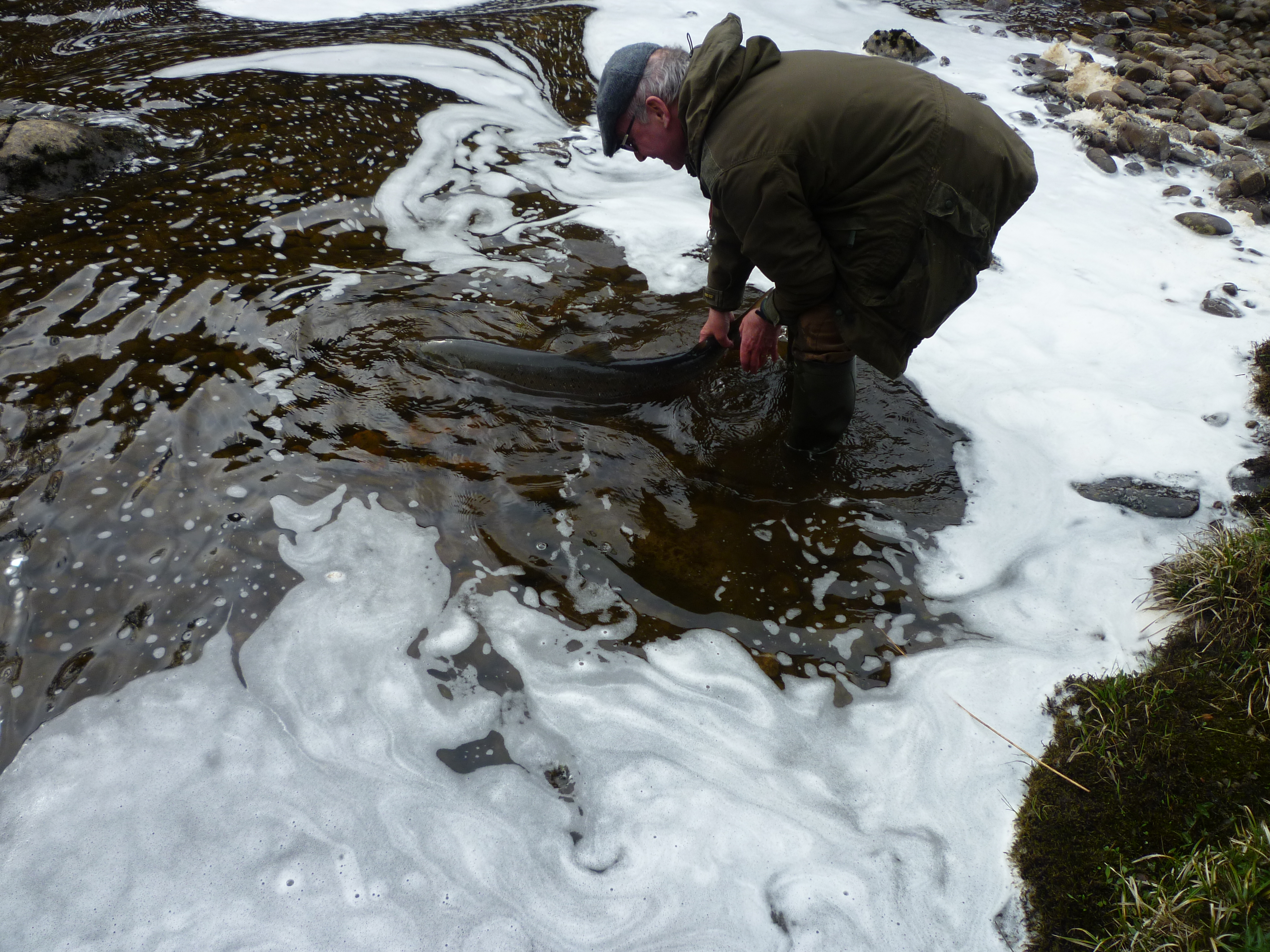 I measured him with my rod from the fork of his tail – marked the length of my rod with tape. I didn’t get the girth because I wanted to get him back quickly – in total it took approx 90 seconds. It took 5/6 minutes to revive him – cupping water gently over him, moving him in the water, he gave a tug, and then when he was ready he swam away with full power.

“I had a lump in my throat when this magnificent fish swam away and thought of the my mentor Jock Fisher who must have been looking down on me. I am proud that the big boy is still swimming in the Lyon to-night.” said Tom.  My wife Mary gave me a kiss.

Tom’s fish succumbed to one of his own flies a 2 1/2” monkey,  tied on a Yuri Shumakov 1/2″ brass tube (commonly known as a 1/2 incher). He has sent us a picture of the mangled hook, twisted out of all recognition.

Tom caught his magnificent fish on a rod that was a prize for winning the top sales person at the Birmingham Motor show back in the 1990, he’s fished with it ever since.

Rod used 12ft WTF-12 Diawia Tournament Osprey salmon/grilse. Airflo skagit line 450grain with a 14ft sinking tip and a 4ft Diawa sensor 18b monofilament and his own wee fly monkey. He told us he uses bug bond on the eyes

He enjoys fishing small rivers and has caught a number of large salmon on small Scottish river;

2003 – 30 plus fish in one day on the River Blackwater, tributary of the River Carron.

Tom is 71 years old – ties his own flies and builds his own rods. Congratulations Tom and thank you for sharing this amazing story with us at FishPal.

Tom started fishing at the age of 3,  his dad used to take him fishing on Loch Lomand.