“A surreal introduction to salmon fishing for his friend Brett from Zambia. Tom was hoping his friend would catch a grilse!” 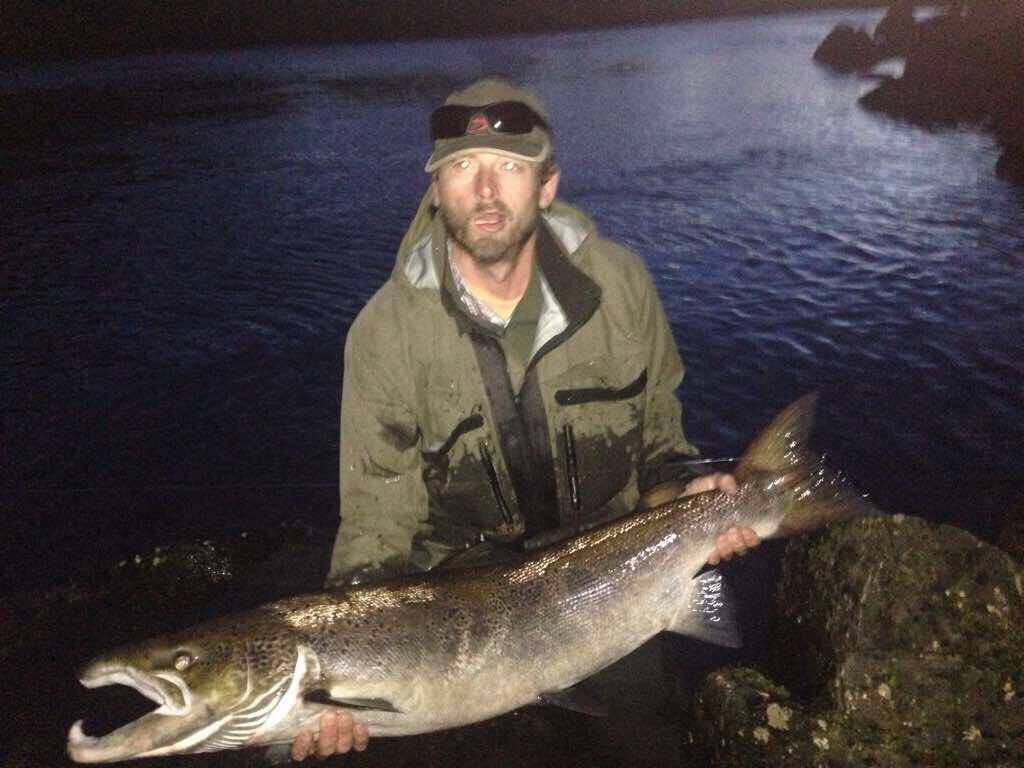 Tom put his friend ahead of him into the famous barrage pool on Huntington ‘Beat A’ , just below the dam.  Brett was fishing Tom’s favourite fly and a fish catcher, a micro cone red francis. The bottom of the pool required a longer cast which they both agreed Tom should fish. After a few casts the fly just stopped and Tom thought  “I’m into a grilse” “nothing crazy!” he lifted the rod and the fish started to move, quietly cruising. It was only when he got into it properly that he thought it was maybe a fish of 10-12lb.

After 10-15 minutes the fish had not shown, and when it wanted to run there was no stopping it. When it finally came to the surface the volume of water it shifted, forming a wave with white froth, Tom realised it was a big mid 20’s fish the size of a small porpoise.

He tried to shift it, “but you can’t bully a fish like this to come in” he said

They had no net so he past the rod to Brett who was new to salmon fishing. It was quite a nerve wracking moment as the fish had taken a tiny fly, size 16 hook, with a old fly line and a braided loop that should have been chaged a long time a go with 12 pound tippet.

It was now dusk and to land it was a nightmare as the evening light was fading fast. Physically seeing it in the water was now difficult, and Tom could not wade out far as the bank suddenly drops down into a deep abyss.

Standing waist deep in the river with water running down his sleeves and into his waders Tom held his magnificent prize as best he could. Trying not to get the fish out of the water, he struggled to hold it as his arms now fully stretched were too short, the wrist (tail area) of the fish was so big he coud not get his hand around it…. “it was colossal” he said

Brett his friend was blown away and managed to take a few snaps on his old mobile phone he had bought with him from Zambia.

He held the magnificent fish in the water for a long time. The fish had other ideas and wanted to swim off, but Tom wanted to make sure he left strong.

Tom said “I never thought I would see a fish of this size in a Scottish river, you hear about them, to see one and catch it in my local river Awe where the runs have been low this year is a very humbling experience. I’m still walking around in a daze. Strangers are coming up to me and congratulating me, it’s a surreal experience”

Brett Saunders from Zambia said “The fish had the power and determination similar to a big Tiger fish, it knew what it wanted”.

The fish measured 47inches and the Sturdy Scale – says it’s 44. Tom is estimating it at between 40-44lb

He caught the fish on his first ever fly reel, a Greys GTX with a dodgy drag, the reel he uses to take novices out fishing with. He was using a old cracked Hardy Mach 55 Spey line. Fulling Mill tippet of 12lb. A micro Schnaelda cone head from Fracis.is and a Partridge of Redditch long shank size 16.

Tom say’s “The fish deserved to be caught on my new Hardy reel, it’s such a lovely reel with a nice drag and deserving of a fish of this size.

Tom and Brett were fishing the River Awe, Huntington ‘Beat A’, with its deep gorges and long fast running pools amidst beautiful scenery. Totally unspoilt and challenging to fish in places.

Tom has entered the FishPal Malloch Trophy. If you would like to enter the adult or junior competition please follow this link.

For more information about the beat and day permits please contact FishPal on 01573 470612 or book permits online here.