We received a call from Kenny Mcintyre this morning about his fishing trip at the weekend to the Wansbeck with his 9 year old son Tom.

Tom Mcintyre regularly fishes with his dad on their local river, the Wansbeck, near Morpeth and during the last year he has caught some good sized brown trout up to 3 1/2 pound, but has never hooked into a salmon.

If Tom could go fishing every weekend he would and regularly asks his dad when they are going fishing, last weekend was no exception. His dad (Kenny) only had 2 lures left in his tackle box and if they lost them he told Tom that they would be going home”.

On the run down the pool Kenny lost his lure, so they were now fishing Tom’s rod.

On Tom’s second cast he shouted to his dad that he had a fish on. Kenny asssumed it would be a small sea trout, until he saw the fish which he promptly asked Tom to take his time. The fish gave a great fight and 25 minutes later, much to the relief of an exhasted Tom, his dad landed Tom’s first salmon of 13lb. 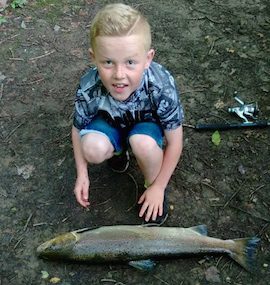 Congratulations Tom from everyone at FishPal.

Kenny has promised to update us after their fishing trip this coming weekend on the Teviot.