Where to fish in Galloway

Posted on November 2, 2012 by FishPal Global Online booking system for all things fishing

Anglers visiting Galloway rarely leave disappointed. Whether it is the idyllic surroundings, affordable fishing or the good service they receive from ghillies and fishery owners; throughout the season – the six river systems that span from Glenluce in the West to Dalbeattie in the East – offer quite different fishing opportunities, whether you are a salmon, sea trout, brown trout or coarse angler.

For the spring salmon angler, there are mainly two Galloway rivers that maintain a spring run of salmon. These are the Cree – which passes through the market town of Newton Stewart and its neighbouring river to the West; the Bladnoch – which outflows at Bladnoch near the book town of Wigtown.

The Bladnoch is an SAC river for Atlantic salmon. The season begins on the 11th of February and on a good rise, the river can draw in fresh fish from the start of the season. Compared to its neighbouring rivers, the Bladnoch is fairly low lying, deep and meanders widely in parts. It is usually in the more frequently fished middle beats of Mochrum Park and Clugston where the first fish of the season arise. These can be particularly rewarding and often of double figure size.
 
About to return a spring salmon at Mochrum Park on the middle Bladnoch

The River Cree opens a little later on the 1st of March. This river is more flashy in nature and fishes best the day following a good spate. Down on the lower river, Machermore (which forms part of Mochrum Park Fishing), the Newton Stewart Angling Association beat through the town of Newton Stewart and Linloskin a little up river, all offer reasonable spring fishing. If it is a dry spring, the pool at Linloskin can hold many fish and indeed this is often where most spring fish are caught, with exception of the Minnoch headwaters.
 
Linloskin pool on the River Cree

The Water of Minnoch is the main productive tributary of the Cree. Being in the headwaters, it offers a sanctuary for spring fish and the main fishing beat of Glentrool Estates can be very popular from April onwards, normally the earliest time at which spring fish are caught. This is a delightful part of the river – full of character and set amongst the dramatic Merrick Hill range.
 
Glentrool Estates beat on the Minnoch

Following the spring runs of salmon and into June, it is night fishing for sea trout that becomes the main interest for anglers – particularly on the fly-only River Luce, Galloway’s most Westerly river.

Being almost entirely run by Stair Estates, the river is mainly let by Stair Estates and is available for daily let from south of the junction at New Luce village. The river can be productive, with anglers fishing nightly between June and September, even in low flows. Sea trout up to 8 lbs have been landed this season.

Fly fishing upon the double water of Luce 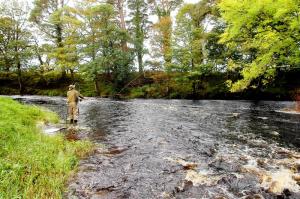 The other Galloway River to hold a nice head of sea trout is the Water of Fleet, which joins the Solway close to Gatehouse of Fleet, within the region of Stewartry. The Fleet Valley is designated one of only three National Scenic Areas in Dumfries and Galloway. It is a true gem of a river – with clear waters flowing from the granite Clints of Dromore and surrounding Cairnsmore of Fleet National Nature Reserve. Ancient bluebell-laced deciduous woodlands span the river and like the River Luce, the Water of Fleet can be productive for sea trout which is the rivers principal catch. Fishing falls under the management of three owners. On the lower river, anglers will most likely be able to access fishing over a mile stretch of water belonging to the Murray Usher Foundation near Barlay Burn. The pools above and below Rusko Bridge and where the river splits into the Little and Big Water of Fleet at Aikyhill can be key spots to fish for sea trout during early summer. These pools are owned by Cally Estate and Rusko.
 
Looking down upon Aikyhill Pool on the upper Fleet 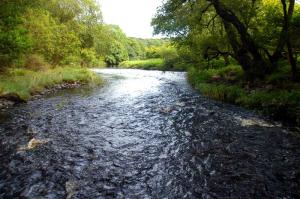 By July, grilse show in the catches on each river and the months of August and September can be very productive for grilse and large summer salmon. In recent years, these months have also been particularly wet across Galloway which has benefitted most of the rivers which rely on regular spates of water to keep flows up. The fairly low lying River Bladnoch can keep a good height for a day or so longer than the other rivers.
 
A summer salmon being returned on the River Urr upon the lower beat of Dalbeattie Angling Association

The Kirkcudbrightshire Dee to the East of the region is also less responsive to changes in flow – being largely influenced by the working of the Galloway Hydro Scheme. On a good year, the river sees around 1000 salmon through Tongland fish pass 1 km up from the head of the tide and these usually disperse quickly throughout the catchment which is one of the largest in the region at over 1000 km2. Salmon make up the majority of catches recorded, lying briefly in the lower river close to Bridge of Dee. The occasional sea trout has been caught but coarse fishing in Loch Ken has been the biggest attraction to anglers in recent years. The loch also has the largest population of non-native invasive North American Signal Crayfish in Scotland which is another major factor influencing migratory fish recruitment in the river.
 
The Water of Ken below Ken Bridge – part of the vast Kirkcudbrightshire Dee system which feeds into Loch Ken

The Water of Minnoch (Cree catchment) closes fishing at the very end of September to help preserve spawning fish. The rest of the Cree (including Palnure Burn) closes on the 14th October. The Bladnoch, Fleet, Luce and Dee all close thereafter at the end of October.
 
Returning a 26 lb salmon to the Bladnoch in October 2012 up at Ivy Tree on Clugston Estate

The River Urr stays open a further month until the end of November. Positioned furthest east in Galloway, this river produces some fantastic catches for its modest size, particularly in the lower reaches where Dalbeattie Angling Association offer day permits for between £20 and £40. Some of the best weekly catches ever recorded on FishGalloway have come from this beat in early autumn. In its upper reaches, the river weaves beautifully through open moorland and ancient woodlands before eventually reaching the main fishing stretch below the A75 road bridge. There is little wonder why anglers visit repeatedly. Being one of only four Scottish Rivers remaining open in November, is obviously also a huge attraction.

 
The Dalbeattie Angling Association water on the lower Urr 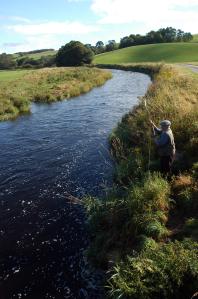 1 Response to Where to fish in Galloway