Posted on August 29, 2012 by FishPal Global Online booking system for all things fishing 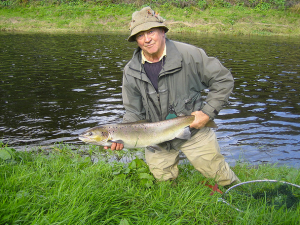 Autumn is a time of great anticipation for salmon anglers on the Tweed, and for good reason. Over the last decade the number of fish running the Tweed system each year has been impressively healthy with 2010 the best season on record.

To fish this world-famous river at the back end in favourable conditions is to experience salmon fishing in Scotland at possibly its finest; the Autumn colours on Tweedside are as seductive as the river itself and over much of its near 100-mile course there is fishing available to suit all tastes and budgets.

The main run of salmon in the Tweed’s more recent history has occurred from September onwards with the last two seasons in particular witnessing impressive numbers of salmon spread throughout the system by early October. 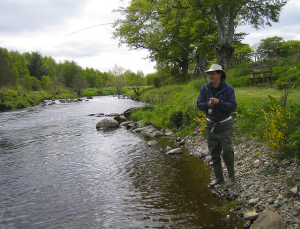 When and where to fish this stunning Borders river can vary considerably depending on time of year, temperature and water levels but the significance of the latter should never be underestimated. It is no coincidence that the biggest catches have coincided with wet years. The previous record season since continuous records began was 2004 with 15,257 rod-caught salmon. A new high was reached in 2010 with 23,219 fish recorded and last year, also continuously wet, 20,836 salmon were landed. Conversely, in 2003 a long dry summer and lack of significant water past August meant fish were held up in the tidal reaches of the river and bottom beats like Hornecliffe and Ladykirk witnessed bonanza catches in September and October whilst much of the river struggled to produce.

Right now we’re probably just at the crux of some serious autumn fishing again throughout much of the system. If we see a repeat of the river levels and runs of fish experienced over the last two seasons – and this year so far has been just as wet if not more so – then the salmon are going to be cropping up on most beats from here on in.

Most catches over the last few weeks have been from the middle reaches down. The occasional fish is being caught as far up as Cardrona just downstream of Peebles whilst a few fish have already pushed on to the upper reaches as far as Tweedsmuir, but really it is the middle, lower and bottom beats that are performing best right now; Dryburgh North, the Floors beats and down to the likes of Hendersyde, Birgham and Wark. If you’re fortunate enough to get on any section of the river from Melrose down over the next few of weeks then grab your chance with both hands and be ready for some action. With the water temperature still reasonably warm nothing heavier than a sink tip and a double is likely to be required. 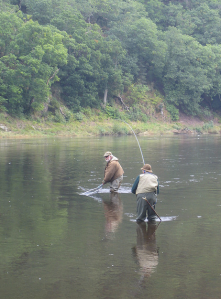 Throughout September, and given the continued rainfall we’ve been experiencing, the fish should begin to arrive en masse and push on through the sumptuous wooded valleys and rolling hills of middle and upper Tweed and the river’s tributaries where great sport can be enjoyed without breaking the bank. Given decent water levels salmon and sea trout will run incredibly quickly and in such conditions it’s possible to catch sea-liced fish anywhere, no matter how far up.

As for tactics, unless the temperature really plummets or when fishing high and/or dirty water there’s rarely the need to fish too heavy a set up. The Tweed is for much of its length a shallow river with steady flow – hence its long-standing reputation as a classic fly water and sink tips of varying densities up to extra fast will cover most eventualities. In most situations a fast sink tip and heavier tube fly will get you as deep as you’ll probably need to go. Full intermediates with a sink tip will have their place too when the going is particularly heavy but considering how, for example, the popular Rio AFS intermediate lines dig in significantly, more like a traditional wet cel II, anything faster than such an intermediate and fast sink tip combination will have you dragging the bottom in all but the highest of water.

As for the business end of your line I’d suggest any fly you have confidence in; the size, speed and depth it is fished at is likely to be more important than the actual pattern. Black and yellow is a popular choice on the Tweed and rightly so. Park Shrimps, Cascades, Ally’s, Monkeys, gold bodied Willie Gunns and a Posh Tosh can all be fished with faith, dressed on doubles, coneheads or tubes depending on conditions. I’ve had particularly good results with doubles and coneheads in most patterns featuring black and/or yellow whilst bottle-nosed tubes in the usual dressings are usually my first choice in higher water. There are many bumpy runs and channels with deceptive depth on the Tweed and fishing square with a fast enough tip/heavy enough fly to get down quickly can be important at the back end. Leave some room in your box for Francis and Snelda patterns too and don’t be afraid to fish a big heavy fly when conditions dictate, no matter how far up the Tweed you are, or to fish small and light in lower water conditions or warmer temperatures; either way a more sparsely dressed, streamlined fly with a longish tail would be my suggestion.

As a rule I always like to fish as lightly as possible but there’s no advantage in pushing things to extremes and we are talking back-end fishing here. I tend to use my 14ft Hardy Demon or 13ft Marksman 2 on the upper river and with ever lighter and more powerful rods on the market fishing a shorter rod is perfectly feasible. The 12’6 Hardy Zenith for example punches way above its weight for a rod of its length. 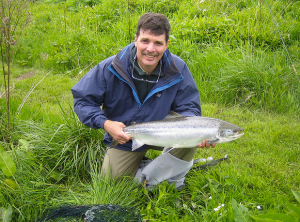 On middle and lower river a 15ft rod will do the business while a 12-14ft rod is about right for the upper river and tributaries. Much of the upper river and the likes of the Ettrick and Teviot can be covered with a single-handed rod but for control of fly and dealing with bigger fish in a strong current a 14ft rod will come into its own. It’s worth bearing in mind that over the last few years there has been an increase in multi sea wintered fish running the Tweed. This season around Scotland generally there have been some huge fish cropping up: the estimated 48lb fish off the Dee at Balmoral; 37lb Findhorn fish; 38 pounder from the Shin, while the Tweed’s Junction Pool produced a 32lb fish in June. Who knows what the Tweed might produce between now and the end of November!

No doubt there will be plenty of days ahead when the fishing is tough, the river too high or low, the weather atrocious or too bright or the fish just not playing for an infinite number of unfathomable reasons, but there are few better places to be than Tweedside in the Autumn and on those special occasions when everything is in alignment you can rest assured that this river will produce some spectacular action.

Finlay Wilson is a member of the Hardy Academy and a regular contributor to Trout & Salmon magazine. He is also fishery manager of the Dawyck Estate beat on the Upper Tweed and available for instruction and guiding on the river through FishWild.
Footnote:
Decades of hard work from the likes of the Tweed Foundation, sound river management, the buying out of North East Coast Fishery drift nets in 2002 and increasingly responsible angling practice have helped the Tweed and its tributaries enjoy such increasingly healthy returns of salmon and sea trout over the last ten years.

2 Responses to Autumn Salmon Fishing on Tweed by Finlay Wilson